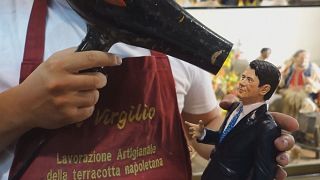 Statuette of new Italian PM Conte made in Naples

Italy's new prime minister, Giuseppe Conte, has joined the long list of political figures from around the globe to be made into statuettes by Neapolitan artisans to be used in unusual nativity scenes.

The statuette is 40 centimetres (15.7 inches) high and is made entirely from terracotta. The Conte statuette has been placed between Luigi di Maio, the Five Star politician and new Minister of Labour and Matteo Savlini, League leader and the new Minister of the Interior.