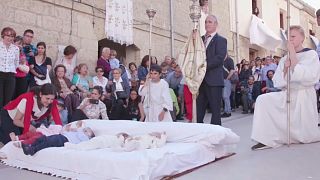 Colachos jump over Spanish babies to bring them good luck

Men representing the devil, known as Colacho, leaped over young babies on Sunday — in an ancient Spanish religious festival designed to chase out bad spirits.

El Salto del Colacho or The Jump of the Colacho, takes place every year in the village of Castrillo de Murcia, near Burgos, in northern Spain.

The babies are all under one year of age and the festival is meant to represent the triumph of Christianity over evil. It has taken place on the feast of Corpus Christi every year since the 1600s.