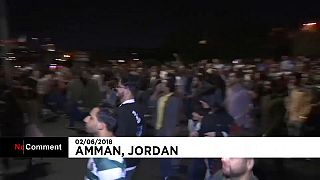 Jordan’s prime minister refused to scrap an IMF-backed tax reform bill at the weekend saying he needs the extra revenue for public services.

It’s sparked the largest protests in over five years against steep price hikes.

Unions say the tax bill, which is part of broader austerity measures recommended by the International Monetary Fund, will worsen a decline in living standards.

Several thousand demonstrators staged protests near the cabinet office for the third consecutive night over the draft legislation.

King Abdullah, who appears to back Mulki, was quoted by state media as saying both parliament and government should engage in a "national" dialogue to reach a compromise over the bill.

Activists say hundreds of people also protested peacefully in other towns such as Ramtha in the north and Maan city in the south.