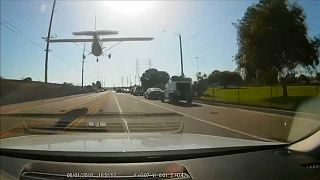 A student pilot made an emergency landing on a busy street in Los Angeles on Friday.

A student pilot made an emergency landing on a busy street in Los Angeles on Friday.

Video shared with Reuters showed dash cam footage of the plane hovering low over the streets, before successfully landing on the road at a distance.

Local media said that the student from Orange County Flight Center was the only person on board the plane and she managed to avoid hitting power lines. There were no reports of injuries or damages.

The student had said she was faced with engine troubles before making the emergency landing.

The plane, a Cessna 172 was flying towards John Wayne Airport, in Santa Ana, until authorities received the call about the craft at five p.m. local time.