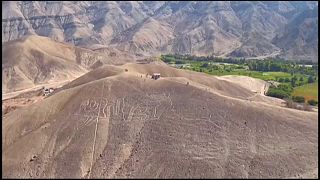 Archaeologists using drones have discovered more than 25 geoglyphs etched into a swathe of coastal desert in southern Peru near the Nazca Lines, a culture ministry official said Monday.

Most of the newly-found geoglyphs, which include figures of a killer whale and a woman dancing, appear to have been made by the Paracas culture, as long ago as more than 2,000 years ago, hundreds of years before the Nazca people created similar giant drawings nearby, said Johny Isla, an archaeologist who heads the culture ministry's conservation efforts in the region.

"The interesting topic is that on the slopes, next to these figures, we have identified new figures mainly anthropomorphic motifs that belong to a time before the famous Nazca lines. We are now talking about a tradition of making geoglyphs that began approximately around the 500 BC, that is, at the end of the development of the Paracas culture when they began to draw a series of anthropomorphic motifs on the hillsides," he says. "We find the figure of a monkey and a woman who is known as a dancer, the monkey and the dancer. These figures belong to the Topara culture from more or less between 200 and 1 BC."

An additional 25 geoglyphs that had previously been spotted by local residents have also been mapped with drones.

"After these anthropomorphic geoglyphs we have other figures in other areas here adjacent to Palpa where there are also zoomorphic figures of felines, snakes, birds and also mythical figures," says Isla.

Drones "have allowed us to broaden our documentation and discover new groups of figures," he said on a tour of the geoglyphs in the province of Palpa, and colleague from the Catholic University of Peru, Luis Jaime Castillo, agrees.

"Before we were able to do the topographic survey in an area like this, we could take weeks if not months and the cost was very high. Now we can do that same work with much more precision in minutes," he says.

But unlike the Nazca lines, most of which can only be seen by flying above them, many of the so-called Palpa Lines were carved into hillsides and can be seen from below, Peru's culture ministry said in a statement.

The geoglyphs created by the Nazca and Paracas cultures are striking reminders of Peru's rich pre-Columbian history and are considered archaeological enigmas, as no one knows for sure why they were drawn, or so large and for so long.

Declared a UNESCO world heritage site in 1994, the Nazca Lines have faced damage by squatters looking for land to settle on and motorists veering off a nearby highway.

In 2014, environmental group Greenpeace apologized to Peru for staging a picture to protest dirty fuels at the Nazca geoglyph of a hummingbird, which government officials said was damaged as a result.

Isla said the Greenpeace incident prompted the culture ministry to ramp up efforts to protect archaeological sites in the region, helping lead to the new discoveries.