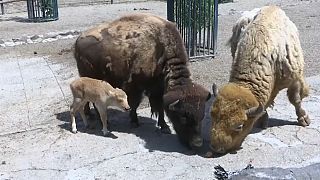 The American bison calf, named Dusanka, was born on Monday, taking after his father who also has almost white-coloured fur, which is rare for a breed which is usually born light-brown or honey-coloured.

A baby fawn was born on Tuesday and attempted its first steps under the close watch of its mother.

Belgrade Zoo is in the central area of the Serbian capital, and is located among the walls of an ancient fortress.