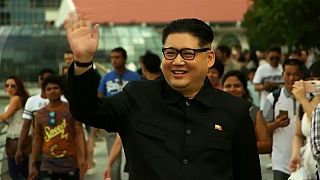 The Australian-Chinese man posing as the North Korean leader called himself Howard X, and said he was hoping for a successful summit between Kim and U.S. President Donald Trump to negotiate an end to the North's nuclear programme.

Tourists near Singapore's Merlion shook hands and took selfies with Howard, some thinking he could really be the North Korean leader.