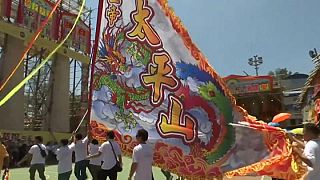 Thousands of people flocked to an outlying island in Hong Kong on Tuesday to celebrate the Cheung Chau Bun festival, one of the oldest and most colourful in Hong Kong which began around 100 years ago after a deadly plague devastated the island.

According to local folklore, villagers built an altar in front of the Pak Tai temple and used white steamed buns as an offering to drive away evil spirits.

Those traditions have since evolved into a bun-scrambling competition, dragon dancers, and a colourful parade featuring children dressed as deities floating on poles.