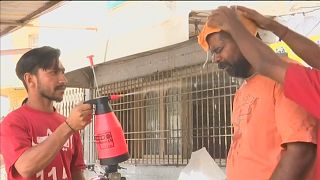 Pakistan's poor struggle to cope with heat during Ramadan

A heatwave has killed 65 people in Pakistan's southern city of Karachi over the past three days, a social welfare organisation said on Tuesday (May 22), amid fears the death toll could climb as the high temperatures persist.

The slums in Karachi have been hit hard by a heat wave with temperatures soaring up to 44 degrees Celsius in the past week. The heatwave has coincided with power outages and the holy month of Ramadan, when most Muslims do not eat or drink during daylight hours.

Residents of the slums say life has become unbearable for people living in squalid huts without any basic amenities.

In 2015, a deadly heat-wave killed more than 1000 people in Karachi and the official data reveals that a majority of the people who died were slum-dwellers. Experts say a water shortage in the city was the major contributor to the high death toll.