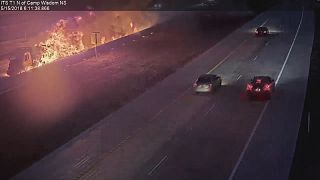 North Texas Tollway Authority (NTTA) cameras was pointing directly onto a state highway when a garbage truck crashed and burst into flames.

According to officials, a driver had stopped in the middle of the newly opened tollway lanes on Highway 360 and was backing up when the fast-approaching truck swerved to miss it and slammed into the center barrier.

The truck hit the wall so hard the front end of the cab was completely knocked off its mounts. A streak of fire marked the vehicle's trail in the run up to the impact.

The driver of the car was taken to a local hospital with non-life-threatening injuries. Amazingly, the dump truck driver escaped uninjured.