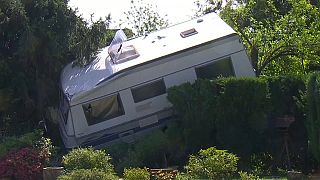 A rare tornado swept through a populated area of Germany on Wednesday, leaving a trail of destruction in the area west of Duesseldorf.

As many as 50 houses were damaged and dozens of trees uprooted.

"It sounded incredibly dangerous,'' said Lothar Houesen, a resident of Boisheim. ''I was looking out the window and I saw a spinning yellow wall coming towards me. Everything was flying around, trees, bushes, tiles ... I was actually really scared."

At least two people were injured, including a firefighter who suffered an electric shock and a 23-year-old man who was hit by falling branches..

Police were forced to close a number of roads because of the amount of debris.