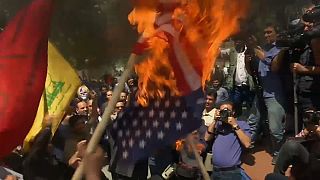 Protest in front of former US embassy in Tehran, in solidarity with Palestinians

Hundreds of Iranian protesters gathered at the former US embassy in Tehran on Wednesday to show their solidarity with Palestinians and condemn the death of dozens of Palestinians along the Israeli-Gaza barrier on Monday.

Angry protesters burned the Israeli and American flags inside the embassy's courtyard.

A giant Palestinian flag was hung on the facade of the embassy building.

Israeli forces shot and killed at least 59 Palestinians and wounded more than 2,700 during mass protests along the Gaza border.