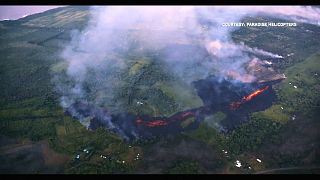 Lava flowing from giant rips in the earth on the flank of Hawaii's Kilauea volcano threatened highways on Monday (May 14), raising the possibility that officials will order thousands more residents to evacuate before access routes are cut off.

Since May 3 when Kilauea began erupting, 19 lava-spewing fissures have opened about 25 miles (40 km) from its summit, including one that tore through countryside close to houses on Monday in the Lower Puna area of Hawaii's Big Island.

The American Red Cross said 500 people sought refuge in its shelters on Sunday night because of worsening volcanic activity.