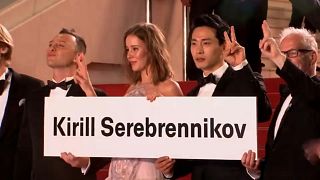 There was an empty chair at a Cannes news conference on Thursday for Russian film director Kirill Serebrennikov, under house arrest back home in a fraud case his producer called "ridiculous".

"Leto" ("Summer"), a biopic about the early days of a Russian rock star in the Soviet era, is the first of two films in the festival's main competition to screen without their director.

Serebrennikov was arrested during the shoot and had to complete editing the film at home, alone, without being able to communicate with his cast and crew.

Russian authorities say his fraud case has nothing to do with censorship though the film's producer, Ilya Stewart, who spoke for Serebrennikov at the news conference in Cannes, dismissed the charges against him.