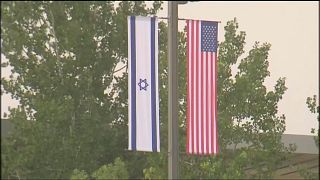 'US Embassy' road signs put up in Jerusalem

At least three road signs reading "US Embassy" went up in Jerusalem on Monday ahead of next week's opening of the mission in accordance with President Donald Trump's recognition of the city as Israel's capital.

A Reuters witness saw workmen installing the signs in English, Hebrew and Arabic, near the south Jerusalem location of a US consulate building that will be repurposed as the embassy when it is officially relocated from Tel Aviv on May 14.