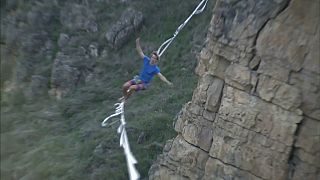 Earlier this week, the Russian Highline Festival 2018 kicked-off in Kislovodsk, attracting over 200 people from Russia, Iran, Israel, Azerbaijan, Georgia, Poland and Germany. The tightropes were attached to cliffs reaching over 120 meters above ground.

Said to be one of the most active volcanoes in the world, Le Piton de la Fournaise on Reunion Island in the Indian Ocean started spewing lava last Friday and continued to erupt in the following days. The event marked the second time it had spewed lava this month.

On Sunday, tens of thousands of people flocked to Buddhist temples across Sri Lanka for Vesak Day, a festival that marks the birth, enlightenment and death of Buddha. Two thirds of the island's 20 million inhabitants are Buddhists. Meanwhile in China, holiday-makers visited the magnificent Hukou Waterfall in Shanxi Province on the first day of the nation's three-day Labour Day holiday.

Then on Wednesday, a deadly fire broke out in a tower block in Sao Paulo in Brazil, leading to its collapse in front of horrified onlookers just 90 minutes later. At least one person died in the blaze seconds before he could be rescued, firefighters told local reporters.