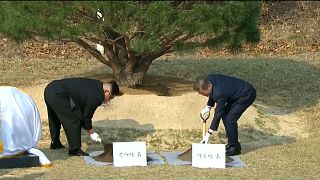 South Korean President Moon Jae-in and Kim Jong Un, supreme leader of North Korea, held an event on Friday during which they planted a pine tree together.

The two leaders kicked off the afternoon with the ceremony after holding formal, closed-door talks in the morning at the Inter-Korean Peace House, located on the border which has divided the Korean Peninsula since the end of the 1950-53 Korean War.

Moon and Kim used a mixture of soil and water from both countries. The pine tree dates back to 1953, the year the Korean War ended in an armistice. The peninsula technically remains at war.

Engraved on the stone plaque for the tree was the phrase "Peace and Prosperity Are Planted," along with the signatures of the two leaders.