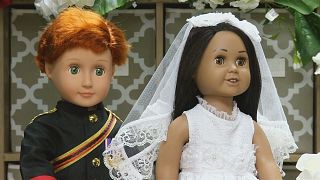 Shirley Lee, a 64-year-old computer scientist-turned-webshop owner and British royals fan, sells 18-inch (45 cm) dolls wearing outfits inspired by historical figures and what she calls "trending designs" - dolls inspired by Belle of 'Beauty and the Beast' and Elsa of 'Frozen' and other characters that have become popular after a release of a movie.

This year Lee is banking on the royal couple to become her trending dolls.

Starting a few months ago, her shop "History Wearz" on e-commerce website Etsy has been selling dolls inspired by Prince Harry and Meghan Markle in wedding outfits - a black uniform for the groom and a lace A-line gown for the bride - Lee's best guess of what the couple might wear on May 19 when they tie the knot at Windsor Castle.

Lee is hoping to get a slice of the 500 million pound ($680 million USD) boost the royal nuptials are projected to provide to Britain's economy, as tourists flock to the country and Britons celebrate, according to an estimate by business valuation consultancy Brand Finance