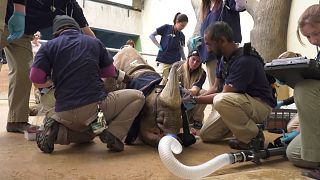 Officials at Brookfield Zoo near Chicago say an eastern black rhinoceros with a nasal obstruction has undergone what is believed to be the first CT (CAT) scan ever performed on this species.

Layla is 7.5 years old and weighs 2,300 pounds - too large to be moved inside the zoo's animal hospital.

So, a machine donated for the procedure was brought to the zoo's Pachyderm House.

Dozens of zookeepers and veterinarians - and some heavy equipment - helped move Layla inside for the test on April 19.

Veterinarians found "abnormal" tissue inside her nasal passageway and now are developing a plan for a surgery to remove it.