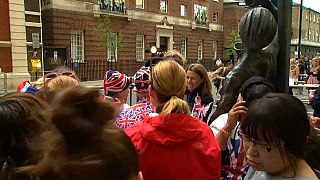 William was present for the birth at St Mary’s Hospital in west London where their other two children were also born.

“Her Royal Highness and her child are both doing well,” Kensington Palace said.

Queen Elizabeth, Prince Charles, the baby’s grandfather, and other members of the royal family and Kate’s family have been informed and “are delighted with the news”, it added.

William later left the hospital to cheers and shouts of congratulations. “I’ll be back in a minute,” the smiling and waving duke said as he drove off to collect the couple’s other two children.

Princes Charlotte, 2, later waved as she entered the hospital, drawing cheers from the crowds.

Until a change in the law in 2013 Charlotte was not considered to be in line to the British throne because she is female.