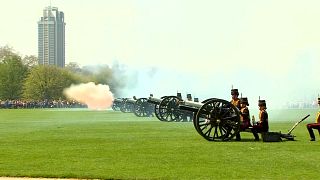 As is customary with the monarch's birthdays, members from the King's Troop Royal Horse Artillery and the Honourable Artillery Company fired gun salutes from Hyde Park and the Tower of London.

Queen Elizabeth, the world's oldest and longest-reigning living monarch, attended a special concert on Saturday to celebrate her birthday. The event is a break in tradition for the queen who usually spends her birthday privately with little public celebration, although there were nationwide events to mark her 90th.