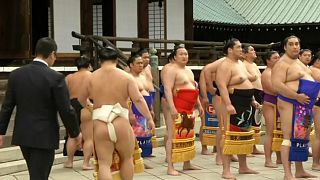 In No Comment of the Week this week: Laughter, sunshine and optimism were the order of the day at the ceremonial Spring Festival sumo wrestling tournament held at a controversial war shrine in Tokyo on Monday. Pope Francis is entertained at the Vatican. Dinosaur fans of all ages were sent back to the era of reptiles when they visited the "Jurassic World" exhibition in Paris that features real-life sized dinosaur displays. And Commonwealth leaders enjoy some spectacular ceremonials in London.