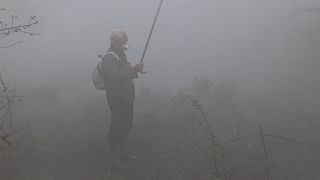 French activists have clashed with riot police for a second consecutive day in western France as authorities continue to evacuate a protest camp erected nearly a decade ago to block construction of an airport.

Four more police officers were injured on Tuesday, suffering leg wounds, a day after one officer was hospitalised after being hit in the eye with a flare at the site in Notre-Dame-des-Landes.

French police denied claims that one of its vehicles burned down after it was hit by a Molotov cocktail.