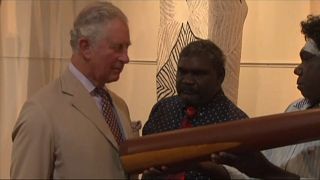 The prince spoke with artists and indigenous leaders at the Buku-Larrnggay Mulka art centre.

Australian media aired footage of Prince Charles taking part in a yidaki healing ceremony, during which the traditional wind instrument was blown on his chest.

About 400 people, including schoolchildren, greeted him outside the centre.

Prince Charles arrived in Darwin later on Monday where he was scheduled to attend a reception hosted by Northern Territory officials.