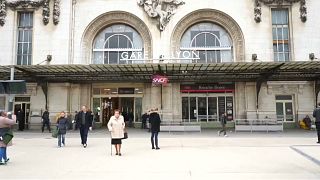 Passengers of a Parisian suburban train line had to enter the train car through windows on Tuesday, the first day of a 3-month long rolling strike in the French railway sector.

The scene happened around 5pm (1500 GMT) at Gare de Lyon, one of Paris's main train stations serving southern Parisian suburban towns and cities in the east.

Vincent Bidondo, who filmed the scene on his smartphone, said passengers got into the train through windows because the doors were locked even though the train was on the platform.