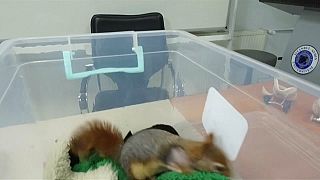 A squirrel who was heavily injured in a wild animal trap and lost both his front paws has been given a set of prosthetic wheels.

The squirrel, called Karamel, was caught in a wild animal trap in the southeastern Turkish city of Batman.

They are waiting for Karamel to adjust to the new device before passing on to the next phase, which would be to provide the squirrel with prosthetic limbs.