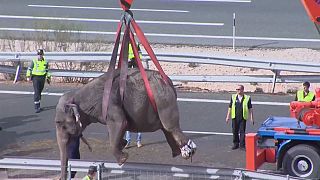 The accident happened in Pozo Canada in the Spanish province of Albacete on Easter Monday.

Investigators said early indications suggested the truck rolled as the driver tried to overtake another vehicle.

One circus elephant died and two were injured.

A crane was used to winch one of the animals from the road.

The truck driver was unharmed.

Authorities were forced to close the motorway as they dealt with the clean-up, causing major traffic delays.