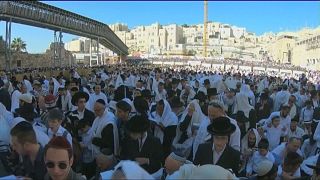 Thousands of Jewish worshipers gathered at the Western Wall in Jerusalem on Monday (April 2) to attend a special priestly blessing prayer during the holiday of Passover.

The prayer is held twice a year, during the Jewish holidays of Passover and Sukkot.

The prayer is led by Kohanim, or Hebrew priests, chanting three consecutive verses of the Torah (Jewish scripture), one word at a time, in a special recitation dating back to the First Temple period.

Considered Judaism's holiest site, the Western Wall is a remnant of the compound of the Second Jewish Temple built by King Herod the Great, which was destroyed in 70 AD. It is located just below the al-Aqsa mosque compound, Islam's third-most holy site.