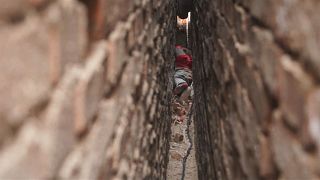 The naughty boy had been playing around the narrow gap before getting himself trapped between the walls of two houses on Thursday morning.

Workers took half an hour to pry the boy, who was unable to move, out of the small opening.

The boy was not hurt during the rescue.

On Saturday, protesters clashed with police on the 'highway of the Nation' linking Albania to Kosovo.

A tax being imposed on users of the road by the Albanian government has sparked outrage.

Albanian and Kosovon Demonstrators gathered on the Albanian side of the Kalimash tunnel, which is part of the highway.