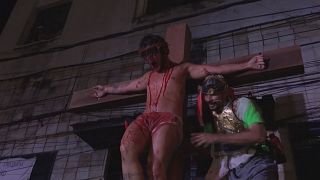 It was part of an unusual production of the Passion of Christ performed in Rocinha shantytown in Rio de Janeiro to mark Good Friday.

The production members and cast were all local residents who used the Catholic Holy week to perform what they called The Social Crucifixion of the Favelado (resident of the slum), to demand the end of violence and to protest for the lack of basic services in the area.

In Rocinha alone, there have been 12 victims of gun violence in the last two weeks, including a military police officer and one man shot dead on Thursday.

But, according to Robson Melo, director of the play, thousands more suffer with the lack of health services, sewage facilities and schools.