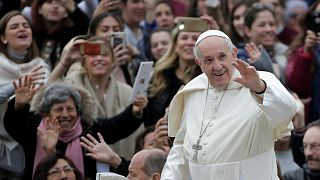 A young cancer survivor’s dreams of meeting Pope Francis came true this week, when the supreme pontiff invited him for a ride in the Popemobile around St. Peter’s Square.

Twelve-year-old Peter Lombardi, who has Down’s syndrome, and his family were in the crowded square for the Pope's weekly general audience when a security guard lifted him over the railing of the Popemobile so he could get a kiss from the Pope.

Pope Francis stopped the car and gave Peter a seat behind him, and a balloon crown.

Peter was just nine years old when he was diagnosed with leukemia in 2015, and his family had been set to see the Pope in Philadelphia that September when they found themselves in a hospital as Peter began chemotherapy.

While receiving the treatment, Peter saw the Pope on television and said he wanted to meet him.