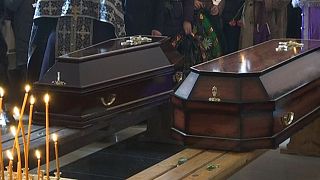 Hundreds of mourners attended a funeral service on Wednesday for two school-age children and their grandmother killed in the deadly shopping mall fire in Kemerovo.

Sergei Agarkov and his wife Natalia were burying 8-year old Konstantin and 10-year old Maria, and their grandmother, Nadezhda Agarkova.

All three had gone to watch a film at a cinema on the top floor of the shopping centre on Sunday (March 25), but had been unable to get out of the auditorium when the fire broke out. Russia media reported that the doors had been locked.

Women wailed as prayers were sung over the three coffins at a service in a Russian Orthodox church.

Agarkov participated in the angry riots following the fire, showing up with pictures of his mother and two children and blaming authorities for corruption and incompetence.

Wednesday will see funeral ceremonies for 15 victims whose bodies have been identified. Other victims will be buried on Thursday (March 29), according to local media.

The fire at the Winter Cherry mall killed 41 children.