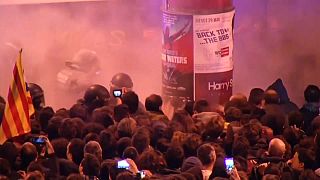 Police and demonstrators clashed in Barcelona

Police and demonstrators clashed in Barcelona on Sunday following a protest over the arrest in Germany of former Catalan leader Carles Puigdemont.

Tens of thousands of Catalans, many of them wearing yellow in support of jailed separatist leaders, demonstrated in the city, chanting "Puigdemont, our president" and "freedom for political prisoners."

In a smaller parallel protest outside the central government delegation in the Catalan capital, three people were arrested and 50 suffered minor injuries after protesters clashed with riot police and set fire to rubbish bins.