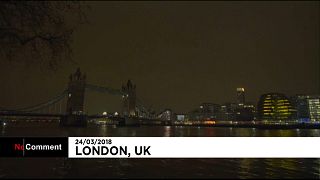 The initiative began in Australia in 2007 as a grass roots gesture by the World Wildlife Fund (WWF) Australia against man-made carbon dioxide emissions linked to a warming planet.

It involved the switching off of electric lights for an hour in 7,000 cities across more than 180 countries, at 8:30 p.m. local time. This year's theme is "Let Nature Shine", a theme that hopes to unite millions of people and promote sustainable living.

The most famous landmark building, monument and places highlighted in the video: