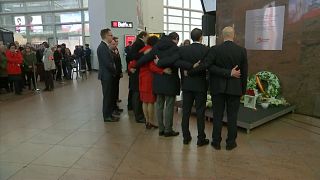 Belgian Prime Minister Charles Michel and other dignitaries laid flowers at Brussels' Zaventem Airport on Thursday to mark the second anniversary of the deadly terror attack.

On March 22, 2016, three Belgian Islamic State suicide bombers, detonated their explosives at the airport and in a Brussels metro train.

Thirty-two people died and more than 300 people were wounded in the attacks.