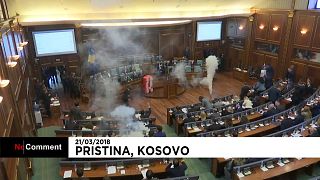 Kosovo's opposition held up ratification of a border agreement with Montenegro on Wednesday, which they regard as a sell-out, releasing tear gas at a parliamentary session called to push the deal through.

Approving the 2015 border deal is a key condition for Kosovo to gain visa-free travel to the European Union, but the opposition party Vetevendosje is adamantly against it, claiming it will wrongly surrender some 8,000 hectares (30 square miles) of Kosovan territory to its neighbour.

Opposition lawmakers threw tear gas canisters into the chamber to block discussion and a vote, causing deputies to withdraw choking and spluttering.