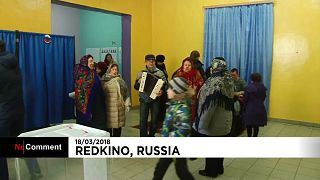 Some residents of Rediko, a village in the Nizhnegorod region of Russia, sang national songs as they walked to the polling station to cast their vote in Russia's presidential election.

The singers were accompanied by a man playing a garmon, or Russian accordian.

Russia's presidential election was tainted Sunday by unprecedented pressure on voters to turn out and incidents of suspected ballot box stuffing - a barely democratic exercise that will grant Vladimir Putin another six years of power.

Given the lack of real competition, authorities are struggling against voter apathy - and have put many of Russia's nearly 111 million voters under intense pressure to cast ballots.

In addition to pressure, there are also other activities on offer around the polling stations, including games for children and other festivities.