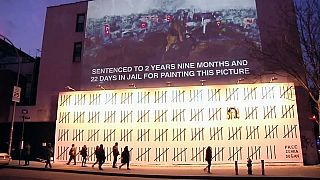 Dogan, according to free speech advocacy group Pen America, was sentenced last year to two years and 10 months in prison for charges of having ties to the Kurdistan Workers Party (PKK).

She was arrested in July 2016, in the crackdown following a failed coup attempt in Turkey, Pen America reported.

The PKK is deemed a terrorist organization by the European Union and the United States as well as by Turkey.

More than 50,000 people have been jailed and over 150,000 sacked or suspended from their jobs in the aftermath of the failed coup.

Banksy's mural has been timed to coincide with the anniversary of Dogan's first year in custody, according to a release from the artist's representative.

It depicts Dogan in prison, with one of her prison bars transformed into a pencil. Banksy created the work with the artist Borf, who the release says has served multiple prison terms for his graffiti.