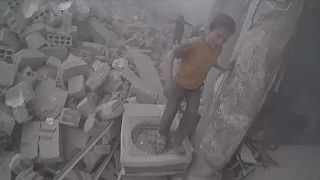 The air strikes come as sick and injured civilians left the rebel enclave on Tuesday in the first medical evacuation since one of the deadliest assaults of the seven-year war began nearly a month ago.

A video uploaded to a social media website purported to show air strikes hitting a built-up area in eastern Ghouta and smoke rising from targets.

International attention has been focused in recent weeks mainly on the plight of civilians in eastern Ghouta, where the United Nations believes 400,000 people have been trapped under punishing bombardment, deprived of food and medicine.

During the army's offensive, which began on February 18th,  more than 1,100 civilians have died, the U.N. Office of Humanitarian Affairs says. Syrian President Bashar al-Assad, whose forces have recaptured most towns and cities in Syria's heavily populated west, has vowed to reassert his control over every inch of the country.

The video shows debris, bodies on the ground, and people panicking as they moved through the destruction after their neighbourhood was bombed.

Some 400,000 people are believed to be living there, trapped under a relentless air and ground bombardment and a crippling years-long siege.