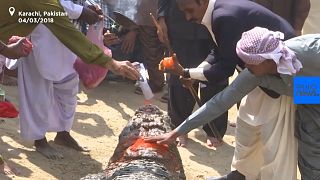 Geneva’s annual Motor Show launched earlier this week, where automakers debut their latest cars and motor technologies for the masses.

Geneva’s annual Motor Show launched earlier this week, where automakers debut their latest cars and motor technologies for the masses.

Booth babes have been a hot topic there in the wake of the #MeToo movement: Most auto brands including BMW, Nissan and Toyota decided against using sultry female models to promote their stands this year, whereas others, like Skoda and Land Rover, stuck with tradition.

Amateur fishermen gathered in central France in time for ice fishing season - made possible by the Arctic temperatures for the first time in two years. Hobbyists and residents braved subzero temperatures to catch rainbow trout and salmon in the Auvergne region's Lake Guery.

At 26 hectares wide and 17 meters deep, the lake is the only one in France where ice fishing is feasible, and the ice was thick enough to withstand the fisherman for hours of hunting.

Devotees seeking blessings flock to the annual festival with offerings to Hasan, which they believe is a descendant of Islam's Prophet Muhammad.