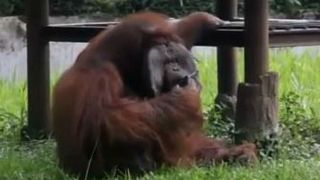 The pictures show a visitor throwing in a half-smoked cigarette being thrown into 22-year-old Odon's enclosure at Bandung Zoo.

Activist Marison Guciano posted a video on Facebook, describing the visitor as "ignorant" and calling out the zoo for failing to prevent such incidents.

"We very much regret that such a thing happened," zoo spokesman Sulhan Syafi'I told the Associated Press, saying there were signs at the zoo warning visitors not to feed or give cigarettes to the animals.

Bandung Zoo has previously been criticised for its mistreatment of animals, poor living conditions and a lack of supervision. Nearly a million people have signed an online petition calling for its closure.

Sun Bears were seen begging for food in this video published last year, a Sumatran elephant died after reportedly being mistreated, while a dead giraffe is said to have been found with plastic trash in its stomach.

Euronews has previously published footage of orangutans at the zoo smoking cigarettes they had been given by visitors.