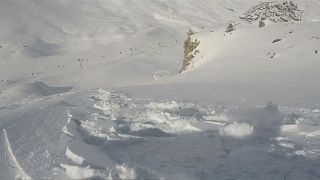 Snowboarder escapes getting buried by avalanche

A snowboarder escaped getting buried under an avalanche in the French Alps on Monday, March 5, with the dramatic footage captured on his helmet camera.

Thomas Kray, from Lebanon, was snowboarding down the slope when the avalanche struck. He said he managed to launch his avalanche airbag that allowed him to float above the crumbling snow, which saved him from getting buried.

Kray said he always carries his safety equipment with him when he goes on the slopes.