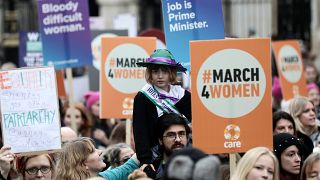 Thousands of people calling for gender equality marched through central London on Sunday, March 4th alongside celebrities, activists and politicians. The event took place a century after the British women won the right to vote for the first time and ahead of International Women's Day.

In the wake of the #MeToo movement by women against sexual harassment and abuse, protesters were calling for an end to gender discrimination and violence in the workplace.

The march ended in Trafalgar Square, where speeches campaigning for women's right to vote took place in the lead-up to the Representation of the People Act of 1918 which allowed property-owning women over the age of 30 to vote for the first time.