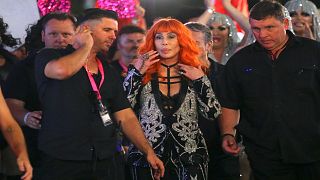 Hundreds of Gay and Lesbian Mardi Gras revellers have made their way down Oxford Street in the Australian city of Sydney on Saturday.

This year's parade featured some 200 floats and groups of street dancers, led by 'Dykes on Bikes'.

Pop star Cher made a brief appearance on the parade route and will headline the official Mardi Gras party.

The Sydney Mardi Gras was Australia's first. It was born as a protest against the country's discrimination of homosexuals.