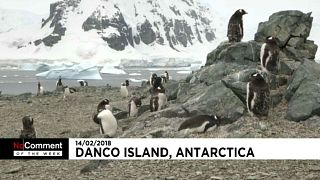 Danco Island, AntarticaDavid Harbour, who plays chief of police in the Netflix series "Stranger Things", danced with penguins in Antartica during Saint Valentine's day as part of a promise he made to Greenpeace activists who are looking for support to build a giant marine sanctuary.

David Harbour, who plays chief of police in the Netflix series "Stranger Things", danced with penguins in Antartica during Saint Valentine's day as part of a promise he made to Greenpeace activists who are looking for support to build a giant marine sanctuary.

Harbour travelled to Antartica with the activists as part of a Twitter campaign. The environmental activists accepted his offer and brought Harbour and actress Alison Sudol along to see the penguins.

The objective of the trip was to make people aware of the environmental problems that this part of the world is going through.

Three Egyptian policemen managed to save a five-year-old boy that fell from an apartment's balcony on the third floor in Assiut, a province south of Cairo. Egypt's Ministry of the Interior shared the images and the names of the policemen who saved the child.

A Greek fishing town went to battle armed with coloured flour to mark the end of carnival season on Monday. The annual 'Flour War' in Galaxidi attracts revellers from far and wide who dance through the streets as flour flies over them.

A manta ray was filmed swimming among plastic bags and other trash while searching for food at Manta Point in Bali, Indonesia.

As a result, more and more bits of plastic can be found inside dead marine mammals, birds, and fish.

A new way to ice climb on the Helmcken Waterfalls that surpasses the 150 metres of altitude in Canada.

The last ice climbing patch was found by Klemen Premrl and Tim Emmett in 2016.