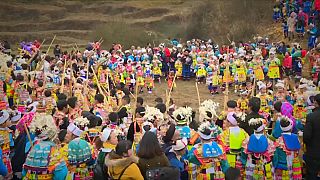 "Tiaoyue" (jump the moon in Chinese) is a tradition of the Miao ethnic group in Longli County of southwest China's Guizhou Province.

The Miao people gathered to spend "tiaoyue" and pick their sweetheart at the beginning of the Chinese Year of the Dog.

They, in their traditional costumes, stood in a big circle, with the males playing the lusheng and females dancing. They moved forward in dancing steps, attracting visitors from near and far.

The same Miao ethnic people living in Wenshan City, neighboring Yunnan Province, also dressed up in their traditional costumes and started the celebration of their "Huashan Festival" staring on the third day of the Year of the Dog.

A series of unique performance with strong characteristics of the Dong culture draw over 1,000 people to the Multinational Autonomous County of Longsheng, where the festival was held.

Visitors were amazed at the performance and many of them wanted to come again next year.

As Ms. Peng, one of the visitors remarked, "even though the village is small, the event has strong cultural characters and has attracted lots of visitors nearby to participate."