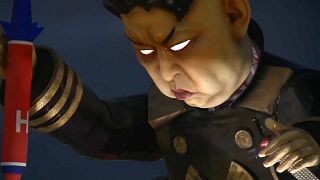 Thousands of people lined the streets of Viareggio on Tuesday (February 13) to watch a series of huge satirical floats parade through as part of the Italian city's annual Carnival.

The masked parade has long been a highlight of the celebration, with the makers of the papier-mache floats attempting to outdo each other in poking fun at the key characters of the past year.

One float depicted North Korea's leader Kim Jong-un stabbing the dove of peace with a rocket, while Russian President Vladimir Putin, Chinese President Xi Jinping and US President Donald Trump held it down.

Silvio Berlusconi, former prime minister and potential kingmaker in the upcoming parliamentary election, and Beppe Grillo, the founder of the populist 5-Star Movement, loomed over the crowd as they passed through.

Meanwhile, a 'Fake News' float featured a giant figure of the Pied Piper leading humans and rats down a route of lies.

"This is a major topic all over the world," said Sabrina Lucchesi, one of the dancers on the float.

Political satire makes up the backbone of the Carnival of Viareggio these days, after first being introduced in the 1960s.

This year 14 floats ranging from 14 to 20 metres in height paraded through the seaside town, all competing to win the first prize, which will be decided on the last day of the carnival on February 17.

The annual event was born in 1873 as an act of defiance and mockery towards the noblemen of Lucca, a town near Viareggio, who sojourned on the coast to get some respite during the winter months.