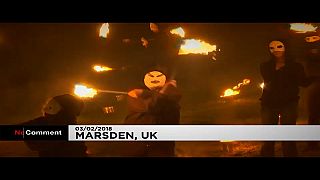 Crowds gathered in the English village of Marsden late on Saturday to watch Winter battle Spring.

The Imbolc fire festival, which dates back thousands of years, celebrates the end of the dark winter days and the return of light.

The celebration began with a procession of villagers dressed as druids and Celtic gods, carrying burning torches to fend off the dark.

Highlight of the festival was a clash between two giants - an icy Jack Frost, representing Winter, and a leaf-covered Green Man, symbolising Spring.

The fiery battle was won by Spring.

Imbolc is celebrated midway between the Winter solstice and the Spring equinox, around the time that ewes begin to lactate ahead of lambing.

It is thought that the name comes from the the Old Irish i mbolg, which means "in the belly'', or Oimelc, meaning "ewe's milk".