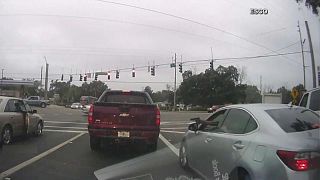 Road troubles in the USA

Police in Florida have arrested a man and are looking for another after a brazen shootout in broad daylight at a stop light...all caught on a dashcam. Video captured froma  waiting driver's dashcam shows a silve Lexus pulling up to a crossroads in Pensacola.

Police say 27-year-old Jonathan James Harris then leaned out of the window and fired several shots into another waiting vehicle.  Harris fled as someone in the other vehicle returned fire.

A dozen bullets were found lodged in the target vehicle, which contained two childen at the time of the attack, which was reportedly drug-related and also linked to a sum of money owed by one of the protagonists.

The wintry weather continues to make the roads dangerous for other reasons, and for a driver of a school bus in Sutton, Massachusetts, the school run on Wednesday was a tricky affair thanks to a flash freeze, which saw him lose control of his vehicle with around 20 pupils on board. No-one was hurt in the incident.