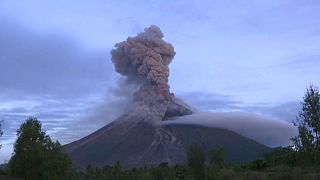 A Philippine volcano belched red-hot lava and clouds of ash and debris multiple times on Thursday, prompting the number of displaced villagers to swell to more than 74,000 and causing officials to brace for a humanitarian emergency they fear could last for months.

Mount Mayon has been highly active for more than a week, ejecting ash and lava fountains up to three kilometres, (1.8 miles), from the crater in a picturesque but increasingly dangerous eruption.

There have been no reports of injuries and law enforcers have struggled to keep villagers and tourists from moving into danger zones.

Pyroclastic flows - superheated gas and volcanic debris that can incinerate anything in their path - reached five kilometres, (three miles), from the crater in one area, the Philippine Institute of Volcanology and Seismology said.

Based on its previous eruptions, Mayon's restiveness could last from two to four months, prompting Albay and national authorities to take steps to ease the impact on schools, public health, safety and law and order, officials said.